Wind energy is clean, cost effective, and one of the fastest growing sources of new energy in the world. With only a few windmills, electricity can be supplied for thousands of homes.

Our mission is to provide the opportunity for people to participate in the development of renewable wind energy projects. We believe in making sound, environmentally conscious investments that are good for our shareholders and our planet. To eliminate one person`s carbon footprint of 10 tons each year (for Germany), it only takes a modern windmill 1 day by producing approx. 20,000 kilowatt hours of zero emission energy.

It also can’t be hoarded by power hungry cartels. In fact, enough of it exists to satisfy global demand seven times over, according to a Stanford University study. North Dakota alone has enough of it to meet 25% of U.S. demand.

Hands down, wind is the fastest growing source of power. But can such growth continue?

The Department of Energy and countless other studies and industry experts say it will. But are they being realistic? Absolutely – and here’s why…… 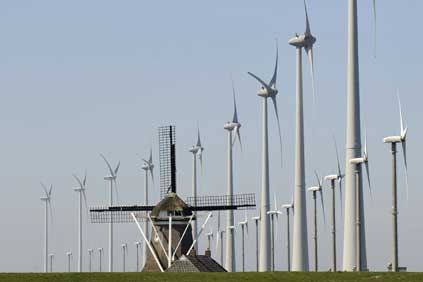 First and foremost, wind power makes economic sense. If the price of oil drops to $50 a barrel, the economics still work; even without government subsidies.

You see, wind can be used to generate electricity for 6 to 8.5 cents per kilowatt-hour.

For comparison’s sake, the cost of nuclear power runs about 15 cents per kilowatt-hour. Coal now costs north of 10 cents (without factoring in carbon capture and storage). And gas-fired power costs approximately 12 cents.

Keep in mind, too, that just a few years ago, wind costs rested north of 15 to 20 cents. But today, costs are low enough in some markets to compete with conventional power generation methods. And future advancements will make wind power even cheaper.

Look no further than Denmark. It already generates 20% of its total electrical output from wind. And Spain, Portugal and Germany boast similarly impressive penetration rates of roughly 12%, 10% and 7%, respectively.

The timing couldn’t be more perfect, either. While wind energy costs are dropping, costs for competing technologies – coal, nuclear and gas – are headed in the opposite direction.

The Kyoto Accord signed by Canada requires that the Federal Government mandate reductions in greenhouse gas emissions to be below 1990 levels. Since 1990 Canada’s C02 emissions have increased by 20%! Ontario’s policy to close coal fired generating plants by 2015 replacing this power with wind will reduce C02 emissions into the atmosphere by 40%. The first closing occurred in Mississauga, June 2005

Canada, with its size and one of the best wind resources in the world has lagged behind until now. The Federal Government has expanded its ecoENERGY Grant of $0.01 / KWh of production to 4,000 MW.

Ontario, who was behind Alberta, Saskatchewan and Quebec is catching up to offset being out of power at peak periods when it is forced to buy electricity at $0.14 to $0.22 per KWh from NY, Michigan and Quebec.

In October 2008, Canada’s largest wind farm, the Melancthon Eco Power Centre near Shelburne, Ontario came on line with 133 turbines, and since that time 800 MW of projects have come on line and the Ontario Minister of Energy, Hon. George Smitherman, has directed the Ontario Power Authority to revise its business plan to procure MORE that the originally authorized 2,000 MW of renewable wind energy by 2015.

In a recent announcement Hon. Smitherman indicated that through the new Green Energy Act, to be introduced in the first quarter of 2009, that the Province was moving toward more rapid deployment by removing regulatory barriers and replacing the RFP process with a “Feed-in Tariff”, the same model that has created 72,000 new wind industry jobs in Germany since 1995.

Sign up for our free stock tips newsletter at: StockPumper.com & ViperStocks.com